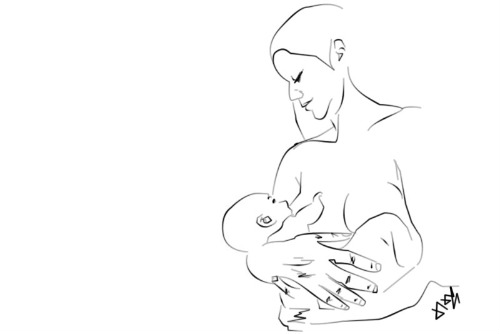 The best nutritional diet for a newborn child can be only – ‘breast feeding’. Breastfeeding benefits are not only for the child, even the mother has beneficial values from it. The various kinds of diseases are solved by the breast feeding. In simple, breastfeeding is the process of feeding mother’s breast milk to her newborn child. It is the best food source for the child in it,s early 6 months of baby days.

The breastfeeding is commenced quickly after the delivery process or 5 hours after the caesarean process. Originally, the milk’s is thick and yellowish in colour that acts as a vaccine. It can be carried out two – three years of well nourishment of the child. It also acts as a pain reliever after the delivery. The average breastfed is 10-12 each day with a time of 14 minutes on either of the breast.

Mother’s milk is said to be safer than cow’s milk. Since, sometimes cow’s milk can cause allergies to the infants. This shows the high nutritional values of mother’s milk. It also prevents the infants from constipation and makes them immune against various diseases and infections.

What are the Health Benefits Of Breastfeeding?

The breastfeeding have many benefits for infants. The milk forms a protective layer like over the baby’s nose and also the throat which prevents from asthma and ear infections.

The fatty acids in the milk play a part in the well functioning of brain. Thus, the infants get increased intelligence when comparing with the other nourishment.

The hormone mainly oxytocin is produced during the breastfeeding that causes the contraction of the uterus in mother’s which is one of the benefits of her.

The risks of breast cancer and ovarian cancer are reduced because of breastfeeding. Since, the cancer cell growths are totally decreased. Also reduces uterine and endometrial cancer.

One of the advantages is that mother’s after delivery undergoes recovery stage so the blood loss is decreased volume of blood loss in the menstruation time due to the lactation.

The calcium deposition in mother’s bones is increased which is bone re-mineralization, after the delivery in order to refill the loss of calcium during lactation.

Aids the mother’s to reduce weight. During the lactation, many calories are burnt for production of milk. Also weight gained during the pregnancy acts as a power source for lactation.

The mothers and babies are tied together emotionally during the breastfeeding process. That develops a secure feeling to the infants towards their mother.